The GGI-South group of about 15 members started off from the starting point, Reliance Apple Showroom at JP Nagar, at about 6.45 am. Weather was a bit cloudy and but not raining, a very apt weather for a bike ride.

We took the following route - Apple Showroom -> Jayanagar 4th Block ->
South End Circle -> Basavanagudi circle (?) -> VV Puram -> Minerva
Circle -> JC Road -> Cubbon Park.
We reached Cubbon Park at around 7.30 am. We had two new members, Tarun and Varun (Rajaram's nephews)
for today's ride. They happen to be identical twins; the first ever pair of twins in GGI group !! Rao nicknamed as Go Green Twins. Coincidently, one of them had a BTwin Road bike. Some of members from other areas were already there and more started joining in. We went around Cubbon Park forming a single line/Foil. With more than 30 members present, this looked awesome. We then gathered around Chamrajendara Wodeyar statue for the group photos. Kumaran had come with his hitech camera, and yes, he came on his bike. Within no time, he setup his tripod and the camera on top of it. The number had now swelled to about 40 and therefore, we took some time in arranging ourself. Thanks to Rao for initiating to create the poster, thanks to Kumaran for volunteering for the shoot and thanks to the GGI members for being present there. We took several snaps. The GGI members are really be keen to see how the posters come out. We are working out to come out with Go Green posters which will be displayed in most of the Cycle shops, Schools & College's

After the shoot, we decided to go for the breakfast. Shantu suggested a nearby place, Ranganna hotel, at Sampangiram Nagar. We had Idli, Rice bath, wada and yummy masala dosas.

We finished our breakfast by around 9.15 am after which we headed back. Overall, the overall distance covered was about 24 kms. GG-Twins, Tarun and Varun along with Rajaram A college going GGI by name
In center (Rajaram's nephews) Kumar from Raja Rajeshwari Nagar
who was part of the ride. (it was almost around 50Km Ride for him) 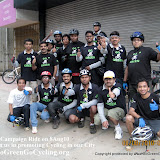 Started from JP Nagar RIS Junction by : 5-30am and reached cubbon park by 5:50am. Since every one were charged up hence took only 20minutes to reach Cubbon Park. To our surprise we met most of the GGI members who have not registered for the ride and they did show up so early to participate. Totally there were 41 GGI along with other BBC members fully charged to break the ice..
Started off by sharp 6-00am headed towards our 2nd pit stop which was opp to Colmbia-Asia
there we met few more bikers who joined the ride. approximatively their were around 100+ cyclist who captured the Nandhi Hills on 01 Aug 2010. Most of the visitors @ Nandhi hills were surprised to see people climbing Nandhi hills by Cycles & they were not ready to believe we have cycled up. :)
This was one of the best ride that was every organised all this was possible due to the kind of coordination that we had with BBC riders, We would thank all of you over their who did rode with us and make this ride a memorable event. 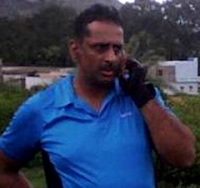 Special thanks to our Brigider Vijay for giving us a support car with medical assistant which was very helpful for taking care of our fellow biker's when he crashed and also for the kind of breakfast + Lunch arrangements that was made available. The best of all was, they dropped few cyclist from Nandhi base to MG Road. They were very very helpful in all the ways and we, from GGI group, once again thank Brigider Vijay & his group staff members.
Group Photo Graph @ Cubbon Park central library.

Following was the route followed.
I (GGR) Started from Columbia Asia by 7:10am
and reached Nandhi base by 8:40am, followed by
Vasu on single speed reached @ 8:50am. 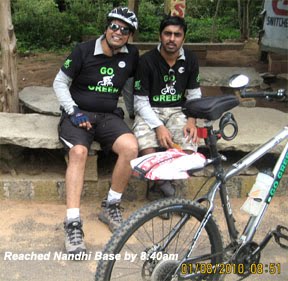 Fixing Vasant Kumar's bike which
had a puncher 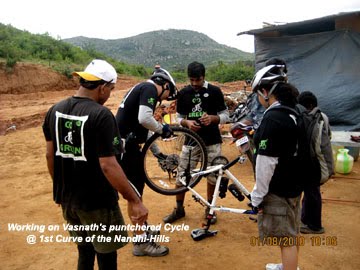 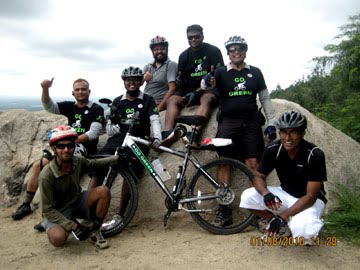 A motorcyclist came on the opposite side and rammed
our GGI Biker Shankar and managed to get back
and rode away. Immediately we had our army
gypsy rushed with medical kit nursed and boarded
Shankar & his Cycle. 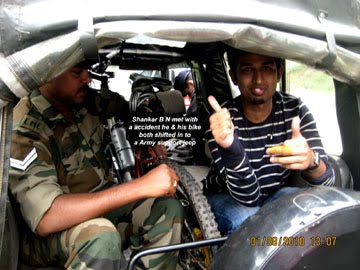 This is what Shankar wanted to say while he was
recovering from the accident.

"Hey i'm feeling better now. Would love to talk but i can't talk for long and u won't understand what i'm talking :) let me know when u'r free and i'll call

Hey thanks for all the support man. Really appreciate it a lot. Wonder what i'd have done without you guys. All i would need is more such fun rides :) and my teeth ;) will call u in a couple of days:)

One more freak accident which was due to
fault of fixing breaks in reverse pattern.
I think we need to make out our voice to
all the manufacture's to follow our Indian
standards/Indian traffic (Rear brakes on left
side and front breaks on Right side.) 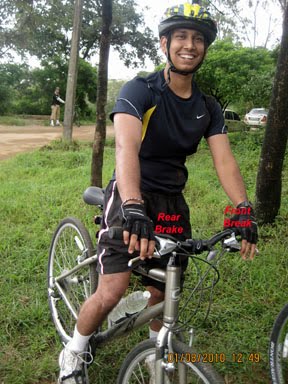 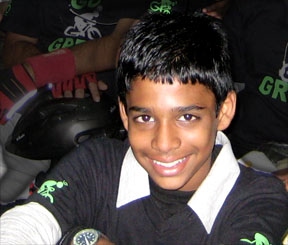 Youngest GGI Member who climbed Nandhi-Hills
Uphill non-stop and he did it with his six speed
Hercules Cycle ..
Oldest GGI Member by name Janardhan who made till the top @ his age of 74 years.... 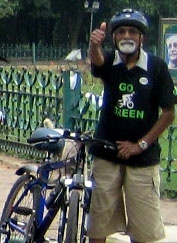 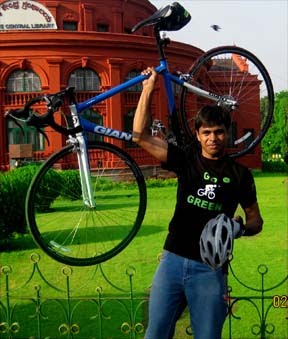 G.R Vijay Kumar(Guru) who did 2 laps
of Nandhi uphill & down hill 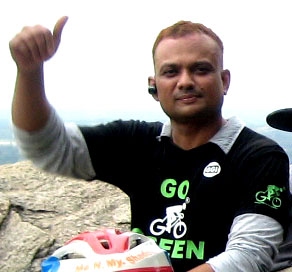 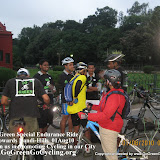 Total 46 GGI's Participated in this GGI & BDS Dr's Cycle Rally, Started from RIS junction by 7:15am and reached Cubbon Park City Library where we had our Major & Dr. Srinivas who along with other GGI's were waiting for us. Samim & Sreeram presence was a pleasant surprise for the whole group..

Started towards Vidhan Saudha to join the Dr's. We all started off from this venue @ 8:30am.

Child Director Kishen flagged the rally and also cycled along with us till City Institute chamrajpet which was the end point of our Rally..

This was the first time that GGI has partnered with BDS Dr's and the event came up to be very successful, All Dr's were really appreciated our Go Green Initiative. We had a Breakfast blast @ the Venue followed with vote of thanks and then dispersed.

Route Followed was as below.

Today was my first cycling experience with you guys in Bangalore. It was great cycling trip to cubbon park and cycling in the city of Bangalore by spreading the massage of GO GREEN GO CYCLING.
With regards,Mayur R.
Architect & RetaiL ExperiencE Designer


I browsed through the sites of a lot of cycling groups before I zeroed on GGI. A colleague's passing sugg

estion about GGI got me completely hooked. Eighteen months of cycling on
Bangalore roads and my overflowing inbox with updates from GGI, got me curious and pushed me to actually go on the weekend ride. I had done a lot of impromptu rides with my friends but nothing like the Sunday one which was my first ride with GGI folks.
The Sunday ride turned out to be a lot of fun and surpassed my expectations. Initially, I was very apprehensive of participating in the weekend ride and was very doubtful about my ability to complete the circuit. The GGI folks turned out to be cool and chilled irrespective of their age. The enthusiasm was contagious and all my doubts [infact the thought of not completing the ride] flew outside the window. The mix of people and their willingness to share cycling gyaan is awesome. I am completely sold on the idea of taking cycling as a serious hobby. I am looking forward to a lot of fun times [with a message to give out to the society too] with GGI!
Way to go guys!......Cheers, Sowmya
Posted by Rao at 2:26 AM 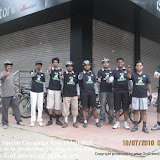 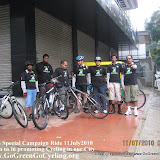 Come & Join us in promoting Green in the City
GoGreen for a better tomorrow GoCycling..
www.GoGreenGocycling.org
Posted by Rao at 10:16 PM 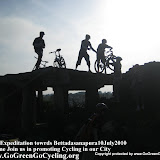 Team of GGI's during Critical Mass 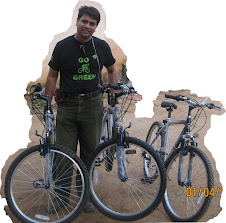 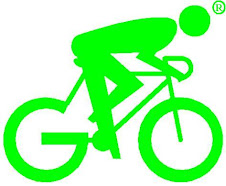 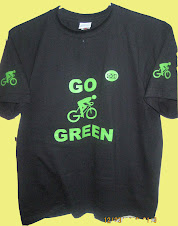 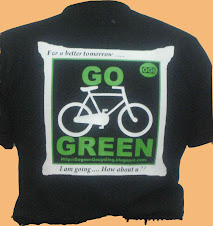 For a better tomorrow.. I am going how about ??

Myself along with my 2 ½ year old daughter 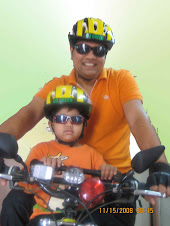 We both together move out on Sunday's and try to bring out some awareness on cycling. 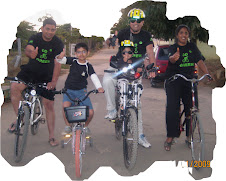